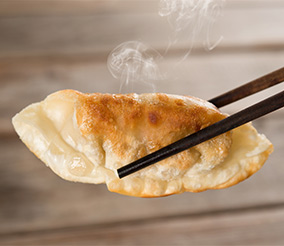 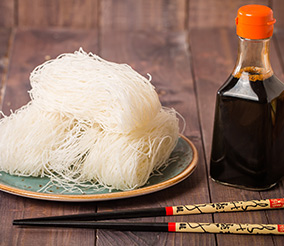 Chinese cuisine with almost five thousand years history is
known as one of the earliest cuisines.

Since the early ages reaching today, in China almost all the cooks, either in a chef’s professional kitchen or a in housewife’s cookery, consciously or not, apply the principals of yin-yang to their cooking. Different ingredients, cutting techniques, careful use of herbs, spices, and other condiments, and cooking manners would render a harmonious balance and contrast between colour, smell, taste, and texture. Archetypally salt is to be a ‘yin’ whereas black pepper is ‘yang’.

Chinese food is very healthy, indisputably delicious, rich in variety and can be prepared easily and fastly.

In Chinese cuisine the taste of the food vary by region. In North regions salty is prefered while sweet in South, sour in East and spicy in the West. Although there are twenty three regions in China and each region has its own very distinctive culinary traditions, we will examine this fine kitchen under four main topics regarding the geography.

Shandong is famed especially with soups and seafood. Meals are generally protein based and rich. ‘Confucian Tradition’ is a part of this cuisine. Serving food in an ornate manner is always favoured.

When people mention of Chinese food, they usually mean Cantonese cuisine. Taste of the Cantonese food is very refined and profoundly unique. Ingredients are used diversely. Food is served in small portions so that one can taste many different flavours all at once.

Huaiyang cuisine is known for being light and sweet tasting compared to China’s other regional traditions. The main ingredient, the way that ingredient is cut, and its color has a major role to the taste. The cuisine presents several traditional breakfast and snack choices.

The most commonly consumed foods in China are, rice, rice flour, eggs, fish, shrimps, mushroom, meat and soy products. Among some of the vegetables endemic to China are, water chestnut, Chinese lettuce, bamboo shoot, and some rare types of mushroom.

Contrary to the opinion, origins of some of the well known dishes in China are somewhat different than how they are known, especially by Westerners. Sweet and sour pork ribs of Shanghai, chicken, fish and/or chicken fricassee in Szechuan, plain chicken or plain goose kebabs in Guangzhou, lamb skewers in Xinjiang are a few examples for these worldwide famous dishes.

Peking Duck’ is no doubt one of the most famous dishes of China. This very traditional food takes several days to be prepared. In the early ages it was considered to be a feast only for the royal or for the very rich.

Another traditional and festive dish, ‘jiaozi’ is a sort of dumpling. This dish is served in bamboo baskets during the festivities of the ‘Chinese New Year’. ‘Dim sum’ on the other hand is a snack food, which is cooked and served in bamboo steamer baskets. ‘Wonton’, also a type of dim sum, are pouches with fillings usually prepared along with minced pork meat, shrimps, various vegetables and flavors. These pouches are made with rice flour phyllo dough.

In China each dish is served at the same time except the soup. Soup is served after all the other food is finished in ceramic bowls with ceramic spoons with a short grip. For the Chinese, soup is not a food but a drink. Mostly fruit is preferred as the desert.

‘Wok’ is used for almost every sort of cooking such as, stir frying, steaming, or deep frying. Sunflower, or hazelnut oil is preferred in order not to dominate the aroma of the food.

With the influence of İslam, in the Northwestern regions, lamb meat consumption is popular though moderately.

In the South regions rice is considered as a main dish. In almost every household, there is an electric rice cooker. In the North however, noodle takes the place of rice. Vegetables, fish, dry legume, mushroom, and seafood complement rice, or noodle in every region accordingly.

Noodles are made with not only wheat flour but rice, buckwheat, or bean flour as well. The noodle takes different names depending on how it’s prepared and how it’s cut. ‘Tang mian’ is a noodle type for soups, ‘ban mian’ for sauced noodles, and ‘chao mian’ is for fried noodles. ‘Qie mian’ is also another type which is known as sliced noodle or handmade noodle.

‘Fang bian mian’ is invented by the Japanese.

Chinese consume this ‘instant’ noodle very often, especially when travelling particularly on trains, as fang bian mian is very easy to prepare by just adding boiling water. That’s why it is not surprising to see hot water rooms or vending machines in public areas.

Chinese invented chopsticks more than five thousand years ago. These are called ‘kuaizi’. Rumour has it that kuaizi is meant to be the extension of finger fearless to cold or hot. Chinese food is usually served on round and larger tables. A rotating round tray takes place in the center. While this tray enables serving and sharing the meal easier, the chopsticks help reaching the service plates. Chopsticks are mostly produced from raw wood or bamboo although ivory, metal, or jade chopsticks are not out of ordinary.

Kuaizi is thicker and longer than the Korean and Japanese chopstick, and has a blunt point.